Russian translation of this article by Genchi Info 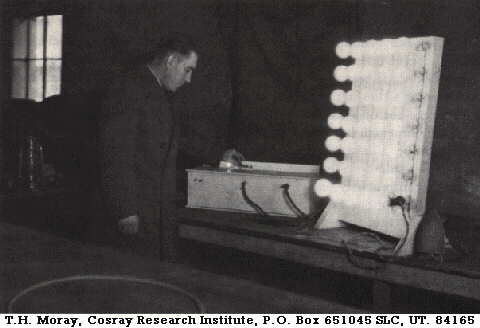 No electric company bill nor meter nor fuel for this power ! !  Free is Good.

This paper describes a process for obtaining electrical energy from the ionosphere, which derives its energy from Solar radiation. The major known phenomena of the ionosphere that contribute to this proposed process are;

The low frequency (RF) Energy originates from the high frequency radiation of the Sun and the Sun's ability to ionize the particulate matter of the ionosphere.  The specific knowledge of how the ionization and de-ionization process produces the long wavelength RF energy is not required to utilize the energy. It is well established that broadband RF energy exists in the ionosphere and that the ionosphere reflects RF energy. This paper only proposes a simple process that may allow us to utilize a small portion of that known energy source.

A specific application of the RF resonance phenomenon is the creation of a resonant RF energy flow between the reflecting ionosphere and a tuned, resonant, vertically reflecting antenna system for the extraction of useful energy. For this radio frequency process, the world's complete global ionosphere becomes the largest solar energy collector available on this planet.

Three natural demonstrations of this ionospheric energy are:

Three man made demonstrations of this ionospheric energy are:

The following web pages describe the main features of this ionospheric energy process. Planned future papers will describe the past experiments by this author. The past work mainly consisted of using a 20 ft. hydrogen balloon to raise a tuned antenna 2000 ft above the north end of Utah's Great Salt Lake. Researchers in other fields of interest have reported obtaining 18,000 ft with tethered kites at Christmas Island. It is expected that long vertical antennas using balloons or kites will expedite reproducing a resonance similar to that obtained by Dr. T. Henry Moray.

Ionospheric energy research of Radio Frequency  radiation is also being conducted by the U S Dept. of Defense, DOD, under the HAARP project.

From a limited search of the available papers it appears that the DOD has not recognized the possibility that their HAARP project should be able to extract useful electrical energy directly from the ionosphere. Although the HAARP projects have many other worth while goals that are being discussed, such as weapons, communications and X-raying the earth, they are all reduced  to insignificance when compared to the goal of unlimited electrical energy available with no meter and no pollution. It should be noted that a major oil company is reported to be one of DOD's prime contractors for the HAARP and  SEE project. The oil industry is very active in solar cell collector development and geothermal energy production. The  oil industry was also very quick at developing the uranium market during the early growth of atomic power.

Ionospheric Energy as Sprites and Jets        Photo via Univ. of Alaska & NASA
Click on images to expand the view.

Currently there is significant work and interest in the flashes of light that occur in the ionosphere. They occur sixty plus miles high, directly above lightning strikes and clouds which are only two miles high. It appears that this RF resonant process causes the red and blue light flash patterns, called sprites and jets, that occur high above the thunderstorms.

The following is a description of the RF Energy process believed to be the cause of the light flashes.

During a lightning strike, a shaft of air two miles high becomes an ionized conductor. This shaft of ionized air is a temporary two mile high antenna. From antenna technology it is well known that a long wire antenna directs the radiation in the direction of its length ( end fired ). As the length increases, the gain also increases and the ground acts as the upward reflector. The impulse function of the lightning strike furnishes a broad band of frequencies and stimulates the ionosphere into EM emission. The random frequency radio energy existing in the ionosphere now has the opportunity to establish a resonant path between the reflecting ionosphere and the temporary lightning shaft high-gain antenna system.  It appears that this resonant process causes the red and blue light flash patterns called sprites and jets that occur high above thunderstorms. It is noted here that our current concepts of Electromagnetic ( EM ) physics hold that light is an electromagnetic phenomenon. With this view these light flashes, and Aurora energy can also be called Stimulated Electromagnetic Emission, ( SEE ).

The purpose of this paper is to alert others to the possibility of obtaining this energy, give examples of similar work and show that success may be possible with a small budget. If everyone lets the DOD and the oil industry develop, patent and copyright this process, it will be seventeen years before the world reaps this harvest of energy. It is naturally expected that governments and oil companies would charge taxes and license fees on the processes of sunshine and fire if they had the opportunity.               Continued >>  Next Pg >

Your comments, calculations and data, reviewing these works are welcome. Some of this original work is based on the data available circa 1975, therefore reviews based on current data may reveal needed corrections.
All reviews and messages will be held as confidential. Reviews, comments, and data will not be used on this site, unless each author's permission is obtained.

You may respond by using the normal e-mail system.  Thank You

For use of the e-mail system click here
mailto:sbyers11@comcast.net